Version control, revision control or, in programming terms, source control systems are different names for one thing – a system that manages different versions of your digital work. In this article SCM abbreviation will be used to refer to it. In most cases they are used for source code (text files) management, but there is nothing limiting them from managing other types of files. Documents, spreadsheets, presentations, graphics are all viable candidates.

This article analyzes designer’s needs and shows how he or she can use SCM to help organize its work files. The first part shows why it’s good to use version control systems, explains what types of those systems exist and how they work. In part 2 we’ll use one to set up a few workflows that could be good for design work.

Designers asked if they use a SCM will usually supply a blank stare and ask “why?”. It is a valid question and one that deserves an answer.

Every designer has its own workflow but most of them (if they know what they are doing) save different versions of a long project. They copy and rename the main project folder or archive/compress it for future reference and for backup. After some time the folder can start to look like this:

Every folder has some or all the files of the current version. It is hard to track what happened to a individual file over time. And what if you work on a file for some time and decided that you want to undo the last two days of editing because you are not pleased with the result? It makes it even more problematic if you don’t have a recent backup and the file from the most recent “archive” folder is from … well … May. AND that’s just ONE person working on a project. Add two more and you’ll probably have a few more mortal enemies in your life.

A simple knowledge of a SCM can save you all that trouble and that’s the main answer to the “why?” question.

There are many developer specific tools for SCM, but not so many design oriented. There are a few, like Timeline, Adobe Version Cue or Softimage Alienbrain, that solve specific problems (like PSD files and their comparison) or have enterprise capabilities. The prices will vary depending on the feature list – you can expect to pay from $50 to $100000 (yes, six digits) for some studio editions. They are good and as one guy said:

… they have to be and you’ll tell that yourselves even if they aren’t because otherwise you’ll be painfully aware that you have just lost your pension.

But is this really necessary for normal work? My opinion is that you can adapt the general SCM (free!) for your workflow to remove common problems. The tools mentioned above can be helpful, but its’ not a show stopper if you don’t have them. It is comforting to know that some of those tools are just a nice graphical interface to a general SCM (we will use here) that hides in the background.

Before we start with use cases and examples, let us see how a SCM works and in what flavors it can be found.

Two terms are very important to grasp early on – a repository and a working copy.

There are two types of SCM – centralized and distributed. The differences will not matter much for a simple work by a solo designer, but if a team works on a project, those differences can be crucial.

As most designers are visually oriented, lets put that in pictures. We’ll have John and Amy working with both types of SCM. 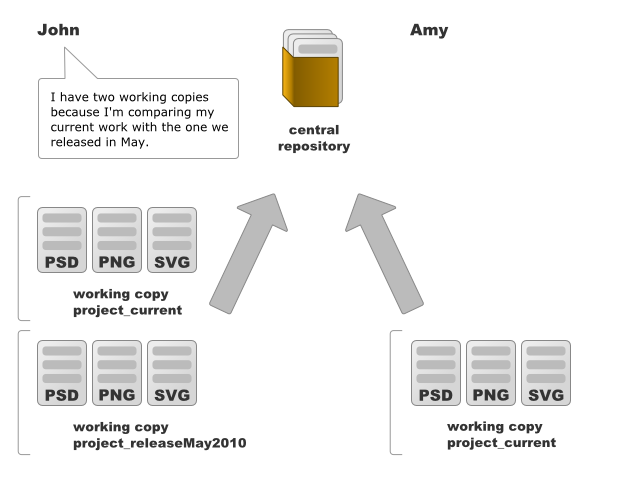 Example workflow of John and Amy working with a centralized system.

Example workflow of John and Amy working with a distributed system.

We’ll finish here for now. In Part 2 we’ll look how to install and use a SCM. I’ll also show you some workflows I used for design work so you can go from there and create your own. Check out our RSS feed or follow me on Twitter to get notified when Part 2 comes out, add comment below or nudge me on Twitter if you want to see some specific questions answered.