Last month Nokia launched the improved version of the Flowella prototyping tool. The changes are not big, but are important. They can be grouped like this:

A developer/designer tool can have all the features in the world, but if you can’t save and later continue your hard work the tool will be discarded very soon. Earlier version of Flowella sometimes had trouble saving your current progress. The workflow could be messed up after loading or the connections between frames could be lost - very frustrating. The new version doesn’t have any of those problems. Saving, loading and exporting works as expected.

The old way to go to the next screen was to click on the specified area. Although this was sufficient for basic testing, it doesn’t really reflect the way people use mobile phones. New Flowella adds more triggers. 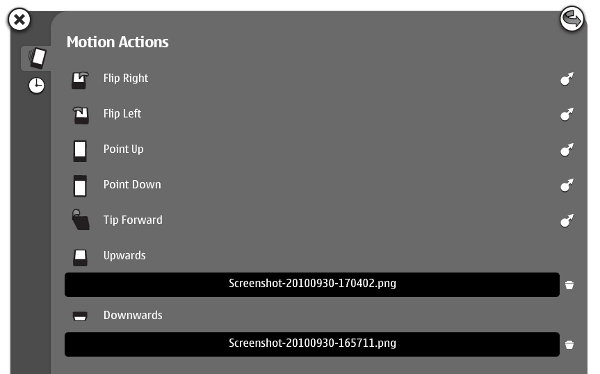 The first new triggers is accelerometer. The prototype can now respond to multiple motions. Just drag the arrow on the right side to the target screen.

The second new trigger. It is great for rudimentary animation and non-interruptible actions (updating, authorizing, etc).

Beside exporting to WRT and Flash Lite, you can now export to Qt Quick. Qt Quick is the new feature of Qt 4.7 and it allows you to create UI layout and behavior by using a language based on JavaScript. No C++, at least for the not-too-complicated stuff. If you’re familiar with web technologies, you’ll get around very quickly.

Here is the sample of the QML code generated by Flowella for one of the screens. It looks almost the same as the JavaScript object literal.

These are some of the posts a stumbled into the other day. I picked them because they gave me a lot of food for thought. I hope they make you think too.

END_OF_DOCUMENT_TOKEN_TO_BE_REPLACED


Posted in Business and entrepreneuership

If you’re designing or prototyping an application for Nokia N900, this resource could be very helpful. N900frame_template.zip contains a SVG file with a N900 background (just like in the header photo), a status bar and a 800x480px workspace so you can easily export your work in native screen size and test it in one of available prototyping tools (like Flowella).

The frame was created in Inkscape, but you can easily import it in some other vector drawing program (AI, CorelDRAW) or use raster graphics in the bundle (N900 hardware and status bar pictures) in Photoshop or GIMP. All the sizes are pixel perfect so you can use it to create quick mock-ups or the final design.

The SVG file contains layers with normal and full-screen grids that are helpful for quick prototyping. Status bar can be easily removed so the full screen canvas awaits you.